Neon Zebra Gels after being gone faaaaar too long

*sigh*  I've been absent from blogging entirely far too long for my liking.  I wish I could say that I actually have a good reason, but I don't really.  Yeah, I was stuck on a ship for what felt like forever, and I moved in with the bf, so i have far less time to myself than i once had, but those are pretty crap-tastic excuses in my book.  Anyway, I've done SOME nails since I've been on land - not many, but its a start.  Oh AND I started working part time at a salon I worked at during highschool - A Finished Appearance.  I've got to say, it feels amazing to be back behind a real nail desk instead of at my kitchen table.  But enough about me, lets get on to the nails.

It took me a whole week after being on land to get around to filling my 8-week-grown-out-nails... if you could even call them nails at that point.  So I went ahead and filed off all the gel so that I could start fresh.  I chose 6 neon/bright colors (Light Elegance Glitter Gels) and then applied them to half nails in order vertically, so  yellow/orange on the pinkie, orange/ pink on the ring finger, pink/purple on the middle finger - you get the point.  I added some tiny reflective mylar and capped all of that with clear gel, cured and filed them into shape.   I gave them a light buffing before stamping them with Konad white stamping nailpolish and a zebra stamp.  Dry, and then a nice gel top-coat and I ended up with some pretty spectacular nails.  Unfortunatly the camera doesn't do them justice.... seriously, I've been told so by people who have seen the FB pictures and then saw me in person later lol.  Oh well.  Sometimes technology is just completely against us.   So without further rambling, on to the pictures. 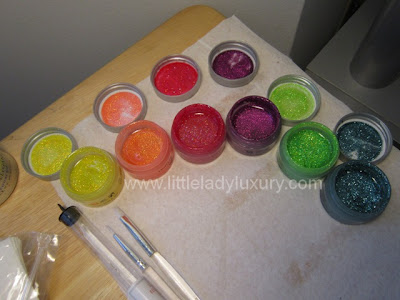 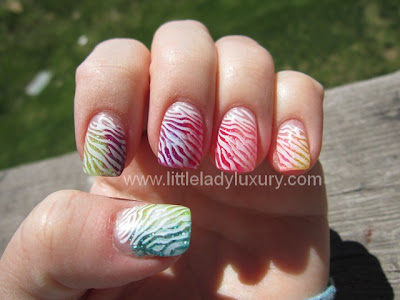 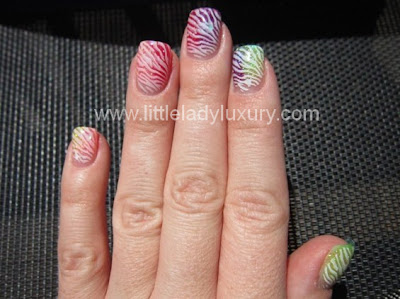