As promised in last post, I said I'd show you how I switched up my original blue glitter embedded enhancements over the past six weeks.  The first picture below is what I switched my nails to about 1 1/2 weeks into my trip offshore.  You can see the regrowth (especially on the pointer finger), at this point I was a bit too lazy to properly file them down and make them blend.  Anyway, I filed off the black line that I had created with gel paint and simply added a silver stripe with some glitter paint that I had with me.  Lastly I added a topcoat (Lumos... which honestly Im not happy with... It peels right off of gel enhancements... and doesn't do much better on my natural nails either).  I think its a cute look, simple, but cute. 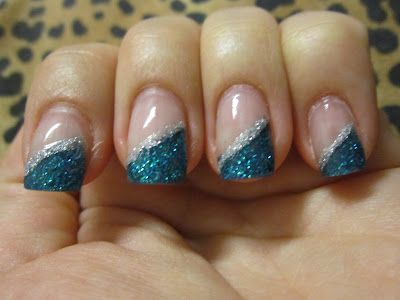 Next I painted my nails Christmas colors which you've seen a few posts ago. After Christmas was done and over with I decided that I wanted something sleek and classy for New Years (and yes, you've seen this picture before in my New Years post, sorry for the repeat).  I knew I wanted black and silver to be used, but it took me a while to finally decide on doing this (next picture).  Again, simple and easy to do.  First I started by filing my nails down to a manageable length, blending the backs a bit and then buffing them to a nice finish.  The blue was already there, although grown out quite a bit so I simply painted complementary black triangles and lined them with my handy-dandy silver striper.  Top it all off with Lumos high speed top coat and there you go.  I didn't wear this long... maybe about 4 days before the Lumos started peeling so bad that I just took it off.  But I did like it for the time that I wore it.  Wish the topcoat would have lasted longer. 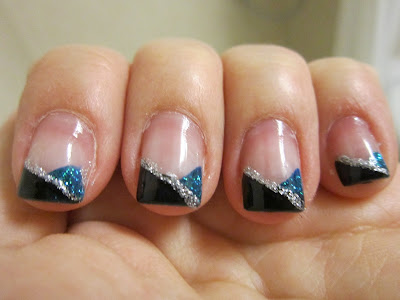 The 3rd and final way I wore my nails this trip is below.  After taking off the polish before I simply decided on doing some black stripes and white dots.  I did the black with a striper and the dots with the tip of a ball point pen dipped in polish.  Again, I topped this with Lumos because I only brought one top coat with me offshore... which is not a mistake i'll be making again (bringing lumos, not just bringing 1 topcoat).  So far the topcoat has peeled off the blue glitter area but stopped peeling right at the first black line... so I'm still wearing this manicure and hoping that it lasts until I go home in 9 days.  Cross your fingers for me alright?  Cause I refuse to re-paint my nails again before getting off the boat. 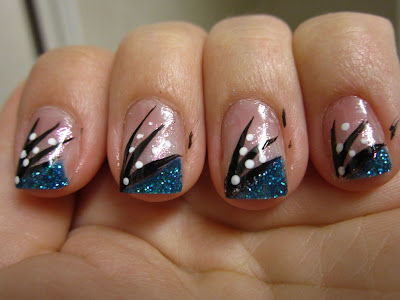 Hopefully you liked the designed.  The nails, although crazy grown out, don't look too bad for being 6 weeks grown out.  No chips, no missing nails... lets hope that holds up for the last few days.
Posted by DivaPirate at 9:23 PM