What can you do with some nail polish, a ballpoint pen, and a plastic spoon? I'm living proof that where there's a will, there's a way. Or perhaps I'm just proof that people go crazy when separated from the things they love to do. For the past two days, my ship has been "down for weather". Meaning: I get to do nothing and get paid for it. Also meaning: extreme boredom. Yesterday I watched 3 episodes of Hero's, read half a book, and played around on the internet. So it was bound to happen that I'd go a little stir crazy today. What did I decide to do with my time today? Paint spoons. Yup.... plastic spoons. I just pretended that they were gigantic nails. Perhaps the thumbs of the Jolly Green Giant. I have no idea, but it seemed to work. So here's what i had to work with: (and yes, this is my liquid carry-on for the airplane... I don't let my nail polish out of my sight!) 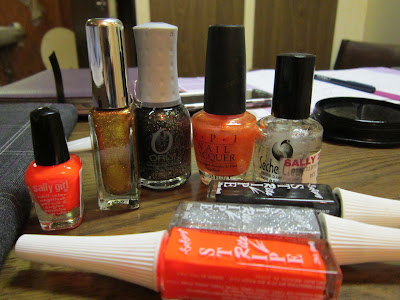 So, armed with my nail polish, 2 plastic spoons, and a ballpoint pen, I set to work! Honestly, I do better work when I have a smaller canvas to work with, but oh well, the spoons did their job. I feel a little less angst-y, so perhaps I'll survive the trip without too much damage from nail withdrawal.
The nail...eeer... spoon on the left I started out by making a black french tip with Orly Androgynie, 2 coats, though it probably could have used a 3rd... but seriously, who wants to waste 3 coats on a spoon? Next I lined the black with my neon orange striper. I'm not going to lie, it took 2 coats to get even that much color out of it. Wish it would be a little more solid. Finally I lined that with my silver sparkle liner... just for fun. Silver is my go to striper for everything, so I had to use it at some point. I "painted" the orange pumpkin using my ballpoint pen dipped in the orange striper, topped with my sparkly orange polish (which i have no idea the name of because the sticker is MIA). I then added in gold lines over the pumpkin to give it some sort of depth, and plopped a silver stem on the top because I didnt have green... What an oversight... I actually had the green striper in my hand while packing and opted not to bring it due to our bag weight limit. Anyway, I added in a moon with the gold striper and 3 bats... or birds with my black stiper/ballpoint pen. I think it would look pretty spiffy shrunk down a bit and put on an actual real nail. Use your imaginations people!
The nail... errr um.. spoon on the right was even easier. I painted an orange tip using my neon orange sally girl polish (one of those $99 grab-me's at the counter of Sally's Beauty Supply), topped off with my mystery sparkly orange. I lined it with 2 coats of my gold striper. Then i outlined my black swirl with a combination of using the black striping brush and my ballpoint pen. I then filled it in with Orly's Androgynie. Finally I added a few black dots and gold stripes to the right hand side. So here they are: 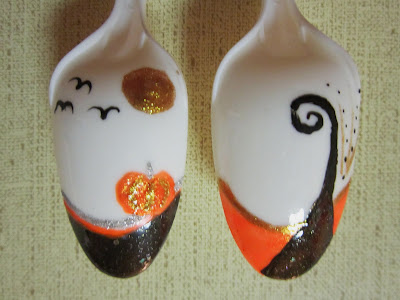 Nothing spectacular or ground-breaking. Incredibly easy so that any beginner could do. And most importantly, it took up a good 15 minutes of my time. Now what to do with the other 1425 minutes of the day?
Be prepared, you may see more of these later on in this trip. Hope you don't think I'm too crazy!
Posted by DivaPirate at 9:00 PM