Just in time for the weekend!

If there is one thing widely known about Pittsburgh, its that Pittsburgh BREEDS sports fans. Seriously, we're all pretty die-hard. Don't mess with a Steelers/Pens/Pirate's fan or you're going to be in trouble. We're also widely spread. I know of Steeler bars in Florida and Oregon, and I'm sure there's tons more in other states.

So with my limited amount of polish that I brought to the boat, I finally realized... duh Megan, you have black and gold polish! Why it took me over a week to realize this I'll never know. So last night, with fall sports season in full swing, I decided to do a Pittsburgh colored manicure. Turns out I ended up with 2 1/2 styles. Here's the first: 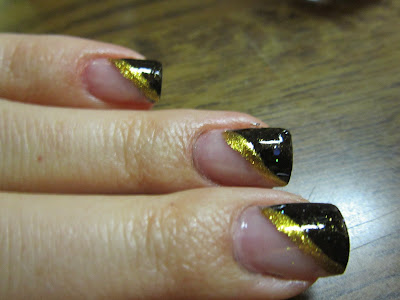 This is pretty typical for what I wear. I like the sideways french with an accent color. Call me boring, but at least I can make both of my hands look the same if I do this. But it DID feel boring to me... so on to style #2: more stripes! 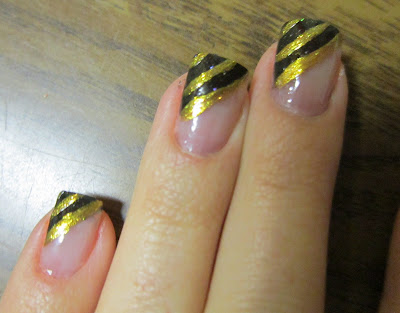 Don't ask me why, but just adding the extra stripes made me a lot happier... which in my opinion is silly, stripes are the easiest thing in the world to do. But alas, I wasn't done yet. I wanted to add some gold-dotted design to my ring finger to spruce this up... and I hated it. So I'm not going to show you. I covered up the dots with more stripes and called it a day with this, style #2 1/2: 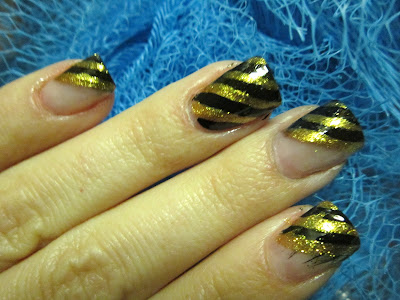 So there you have it! Pittsburgh black and gold striped nails. I'd love to add a "P", "steelers" or "Pens" on the ring finger in white, but I didn't bring white offshore this time. Again, hindsight is 20/20. The black polish is Orly Androgynie and the gold is a striper from Sinful Colors (drugstore polish, but actually good?! who knew?). Anyway, I'm happy enough with this manicure, hopefully you are too!

Oh and tomorrow I put up the rules for Little Lady Luxury's first ever give away. Its a small one, but totally worth entering! Think Nfu-Oh! Until then!
Posted by DivaPirate at 2:07 AM